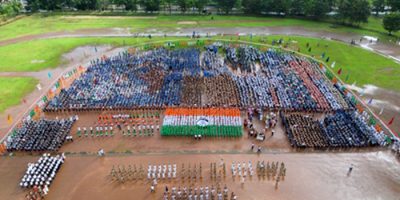 75th Indian Independence day was celebrated at Sr D Ratnavarma Heggade Stadium at Ujire. It was a true account of Azadi Ki Amrit Mahotsav!Very early in the morning of the 15, students, staff, and the heads of various institutions gathered in the stadium, Dr. D Veerendra Heggade, President of SDM Educational Society, hoisted the National Flag and addressed the gathering. He opened that the sacrifices of our elders gained Independence, and we must remember their gift for the better of our future. In a symbolic programme, Dr Heggadeji handed over national flags to 75 senior citizens of Ujire, and they, in turn, handed those flags to an identified 75 children. It was to commemorate our Independence and make the youth realise their responsibilities. NCC cadets presented the ceremonial drill set to the bands of  Rovers and Rangers. Students of Kalavaibhava presented music and dance set to the tunes of patriotic songs. Students and staff from various institutions, NCC cadets,  NSS Volunteers, Rovers and Rangers were present. Students and the national anthem and patriotic songs. Sri D Harshendra Kumar and Dr S Satheeshchandra Secretaries of SDM E-Society, Smt Supriya Harshendra Kumar, Associated NCC Officers, and Heads of the institutions joined Dr Hegderji while flag hoisting. The public of Ujire and members of the media participated in the celebration. Sweets were distributed at the end.