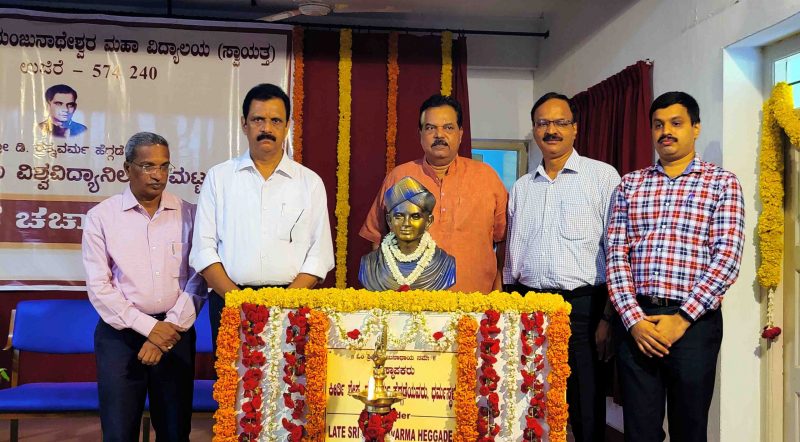 Mangalore University Level Sri D Rathnavarma Heggade Debate Competition, an annual event, was held on Wednesday, 17 August 2022, at the college premises. Dr S Satheeshchandra, Secretary, SDM E Society inaugurating the event, opined that Sri D Rathnavarma Heggade was a visionary who could envisage a futuristic educational thought by building a quality higher education institution in a rural place like Ujire. Ujire, a junction having crossroads, was once known for its directions shown to many places. At present, it receives people from several places for quality education. Dr A Jayakumar Shetty, Vice Principal of the college, welcomed the gathering and Dr B P Sampath Kumar, registrar of the college, explained the objectives of the debate competition, Staff and students were present.

Sixteen colleges in the Mangalore University area participated in the competition for a rolling trophy and attractive cash prizes. Vivekananda College Puttur won the first, and PPC Udupi won the second prize in the ‘Debating for against section. Sridevi K of St. Philomena College Puttur bagged the first prize in the individual category. The first prize was awarded a trophy and a cash prize of Ten Thousand Rupees, and the second prize was with a trophy and a cash prize of Eight Thousand Rupees. The individual best performer received a certificate and a cash prize of five thousand rupees. Participants debated on the topic ‘ Do the internet spoil the health of society?’ Sri Krishnappa Poojary, retired Principal, Gurudeva College, Belthangady and Dr Mythri Bhat, Lecturer, Vani College, Belthangady, judges of the competition, shared their experiences of the completion. Dr P N Udayachandra, Principal of the college, handed over the prizes to the winners and congratulated the participants. The Cultural Committee of the college coordinated the competition. Dr Sudheer K V, Coordinator of the committee, proposed a vote of thanks and Dr Diva Kokkada, Assistant Professor in Kannada, Mastered the Ceremony