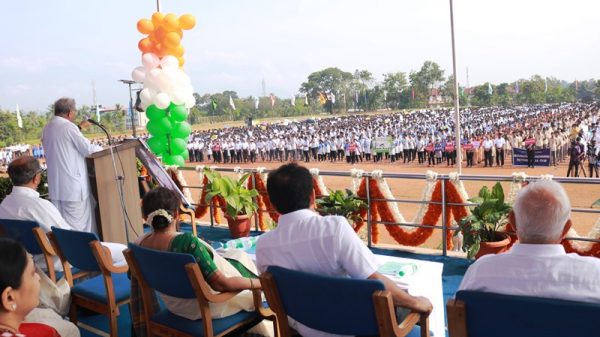 The country observed the 150th birth year of the Father of the Nation today, but SDM made it large. Gandhi Jayanti was observed at Shri Rathnavarma Heggade Outdoor Stadium at Ujire with over 10,000 people taking an oath for the collective betterment of the country.

President of SDM Education Society, Dr D Veerendra Heggade presided over the event that was followed by a procession of students from various colleges to the stadium. Emphasising the relevance of Gandhi’s ideals in contemporary context, Dr. Heggade also made note of Lal Bahadur Shashtri who also shared his birthday with the Mahatma. Leading the oath to 10,000 members (consisting students, faculty and local public), Dr Heggade encouraged the young minds to work in unity towards national well-being.

D Harshendra Kumar and Dr B Yashovarma, the Secretaries of SDM Education Society were present. A web series produced by SDM Multimedia Studio, Bapu, was released at the occasion. The videos shall be available on YouTube starting October 2. Attractions of the day included the special aspects included by students in the procession such as Chende, placards, Khadi attires, paper caps and little kids dressed up as Gandhi. Also stealing limelight was the car displayed from Manjusha Car Museum which was used by the Mahatma himself during his tour of the country. Birds eye views of the formation on the ground displayed Gandhi’s spectacle and Charaka formed by students. Tiny tots dressed up as Gandhi stole the show!