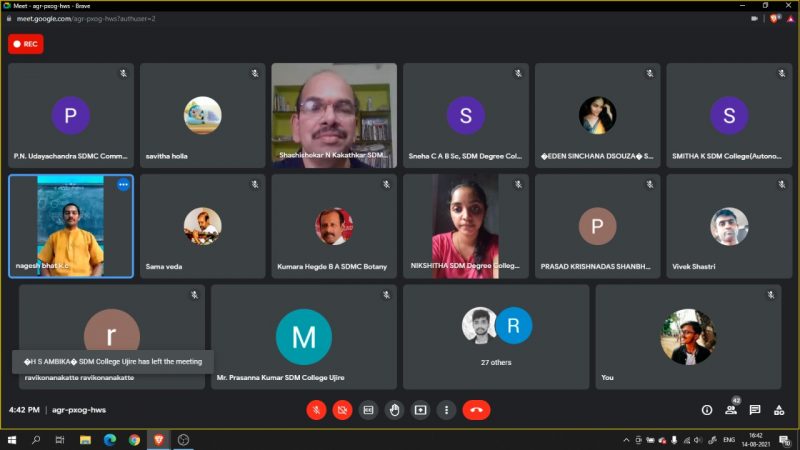 Indian astronomy was heavily tied to their religious and spiritual outlook of the world, but it contained many accurate observations of phenomena” ,Dr Dr Nagesh Bhat,Assistant Professor in Sanskrit,Srimata Sanskrit college ,Sirsi, was addressing the members of SDM ASTRONOMICAL CLUB in the webinar INDIAN THOUGHT OF ASTRONOMY.He was of the opinion that Indian Astronomy is to be included in school textbooks so that present students will have a look into the field.

The club was inaugurated by Dr Udayachandra, Dean of Commerce who was of the opinion that students should develop questioning  about the surrounding cosmos and through repeated and systematic observations relevant theory can be developed.

Principal Dr Satheeshchandra presided over the function and graced the occasion. He told that Interdisciplinary clubs like this bring the people together and  these clubs become  the platforms to exchange ideas, thoughts ,organise invited talks etc.

Over 100 students and faculty members actively participated in the interactive session and discussed about their concerns in the field. HOD of Physics Department Mr S N Kakathkar and other faculty members were present.

Sathvi K Bhat welcomed and Savitha proposed vote of thanks. Smitha was Master of ceremony