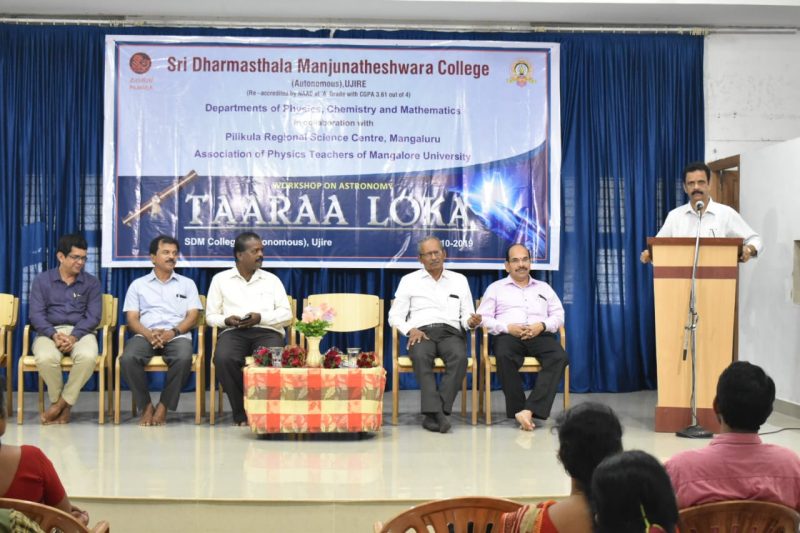 The Physics department of SDM College Ujire organized a workshop on Astronomy “TAARA LOKA” on 24-10-2019, in association with Pilikula Science Regional centre Mangalore, Association of Mangalore university Physics Teachers and Departments of Chemistry and Mathematics. The programme was organized for High school Teachers and students of Belthangady taluk.

The work shop was inaugurated by Prof Dinesh Chowta, Principal SDM PU College Ujire. He stressed the importance of Fundamental science like Astronomy without which modern science cannot be evolved. Students are to be encouraged and motivated towards fundamental science, he added. 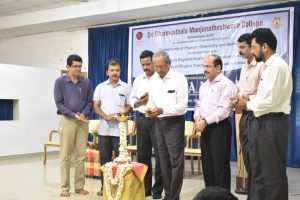 Mr. Sathish P, Block Educational officer of Belthangady taluk was the chief guest. He was of the opinion that change in the universe is inevitable, we have to change with the change. New scientific equipment’s play an important role in bringing the changes in people.

The function was presided by Prof Satheeshchandra S,Principal of the college, who appreciated the organizers for arranging such beautiful and meaningful programme. The Programme will not only enlighten the participants about the vast knowledge but also will enhance the curiosity to study further. It motivates the participants to visit nearby Planetarium and study astronomy ,It enables the students/Participants identify various celestial bodies like stars ,constellations and planets in the sky, he added. He was of the opinion that researches which are being carried out in Space science are not a waste as some people say, but the additional knowledge that we gain through these activities is vast.

He also said that Astronomy and related fields are at the forefront of science and technology; answering fundamental questions and driving innovation. Although blue-skies research like astronomy rarely contributes directly with tangible outcomes on a short time scale, but over a long run it contributes a lot. 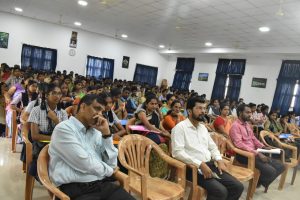 In the technical session Dr A P Radhakrishna spoke on VISHWA VISMAYA , i.e. on origin of the universe, evolution and end.

Mr. Jagannath, Curator of science centre explained the activities of the planetarium of the science centre and arranged video show related to Astronomy.

Pro T N Keshav handled a special session on importance of Astronomy ,its vastness and other related things, he also explained about the use of Astronomy Apps in understanding the celestial matters.

In the last session there was mutual discussion with the participants and resource persons which was followed by question and answer session. In valedictory function participants expressed their opinion about the entire programme.

A total of 174 participants are benefitted by the programme.