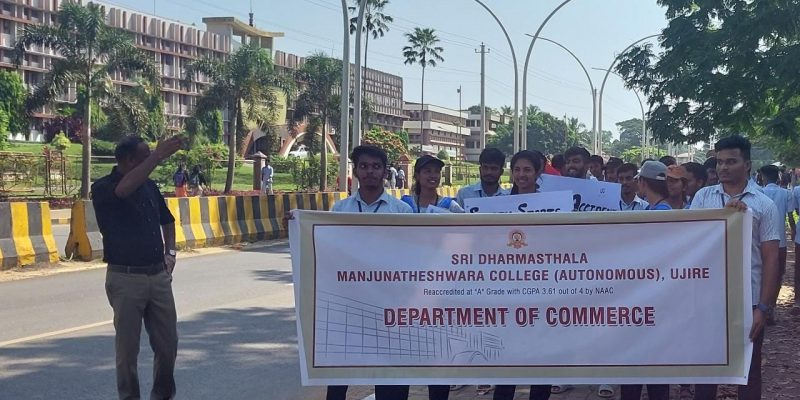 The Students of the third year commerce department of the SDM college created awareness about the importance of road safety by distributing chocolates and posters in collaboration with the traffic department police at Ujire on December 17.

Motorists who were afraid of being fined by the police for breaking the rules had different feelings when they got chocolates instead of fines. It was found that some accepted the sweets with a smile, while others accepted the chocolate with shame and surprise and vacated the space with embarrassment.

The program was launched at the Talents Corner of the college. Belthangadi Traffic Police Station Sub Inspector Odiappa Gowda addressed the students and said, “Buying an expensive vehicle is not enough. According to the road rules, it should be run without disturbing the public,” he said.

“Just as you obey the rules of the house, you must respect the rules of the road. “Crime Prevention Month will be held in the month of December to create awareness about road traffic safety,” he said. College Principal Dr. A. Jayakumar Shetty said, “Vehicle riders should consider other motorists and pedestrians as their family. “We should donate blood and not spill blood on the road,” he said mysteriously. Led by police officers, the students took out a campaign from College Road to Ujire Main Road and raised slogans about road safety. He took an oath that he will not violate the road rules.