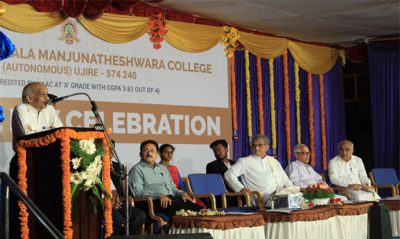 “The current generation needs to comprehend the importance of applying their academic knowledge to make practical commitments that can ensure world welfare”, said the former Chairman of ISRO, A.S.Kiran Kumar. He was addressing the gathering as the Chief Guest at the annual day ceremony of SDM College Ujire on 20 March.

“India ranks fifth on the list of countries with excellent scientific and technological achievements. This was only possible owing to the perseverance of the scientists of India. Despite a lack of financial resources, India has pioneered the field of scientific achievement and has become a model for the same. In order to uphold the same identity and further enhance it, the youth of India needs to creatively and experimentally broaden their intellectual horizons”, he added.

Mr. Kumar also stated “ Academic excellence should not be used for personal development alone, but should be implemented such that the society, the nation and the world can reap its benefits. With a virtue of team spirit, innovations that shall make the country proud must be made. ISRO has always strived to set an example to this ideal.”

“In the field of space study and research, ISRO has proudly set up models and been a teacher to most advanced institutions in the world. ISRO satellites have been instrumental in predicting hurricanes and extreme weather conditions weeks in advance, preventing innumerable casualties. Information related to availability of fish within the ocean saved the fisheries department a sum of 15 thousand crores. ISRO also holds the fame for having discovered water on the surface of the moon,” he continued.

The President of SDM Group of Institutions and the Dharmadhikari of Dharmasthala, Dr. D Veerendra Heggade who presided over the event stated “ISRO has accomplished new milestones, having added a new dimension of competence to Indian defence. The young generation must keep a keen eye on such developments. Those must be the leading lights for the students of today to set ambitions and work on them.”

The Principal of the college Prof. TN Keshava welcomed the gathering. Dean Dr. Jayakumar Shetty presented the annual report. Dr. B A Kumara Hegde, Dr. Shreedhara Bhat and Shruti mastered the ceremony. Dr. B P Sampath Kumar delivered the vote of thanks. 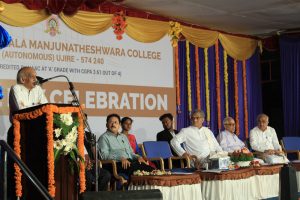 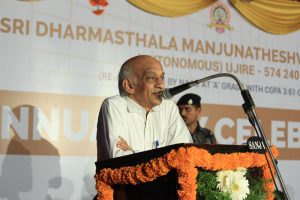