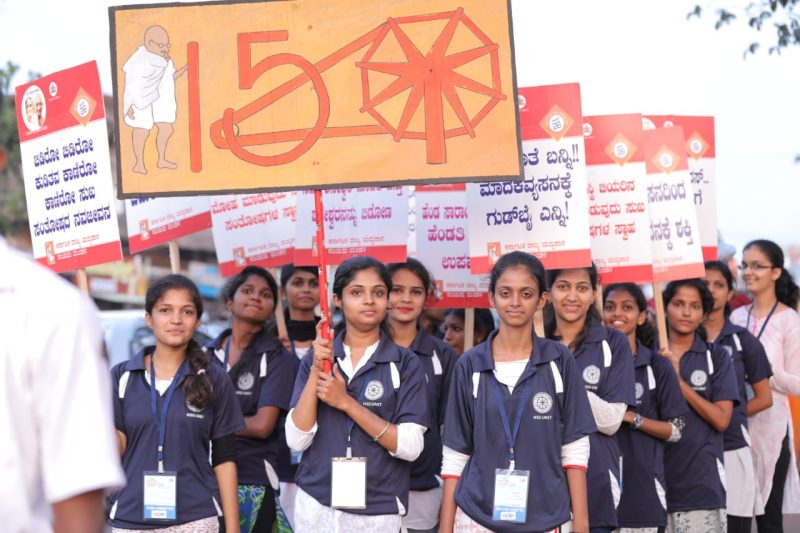 “NSS incorporates the value of unity in diversity in the most effective manner. This helps an individual to build his personality and adapt better to his society. Hence NSS is the foundation for a balanced life”, said Prof. Dayananda Nayak, Financial Officer, Mangalore VV. He was speaking after the inauguration of national level NSS Integration Camp organised at SDM College Ujire from 28 December 2018. The camp took place at SD under the monitoring of Youth Service and Sports Departments of Karnataka State Government. The focus here was towards cleanliness programs, environment conservation, personality development, ideals of Mahatma Gandhi and Swami Vivekananda, etc. Special programs regarding cultural integration of the nation were also held for an entire week.
The camp started off with a procession from Ujire to Siddhavana and a flag hoisting session, after which a number of developmental activities were conducted for the participants. Cultural programs were delivered every evening by representatives from different states. Famed magician of the area, Kudroli Ganesh and team entertained the campers with a magic show on the first day of the camp. A free cancer dialysis and diabetes check-up facility was hosted on the third day of the camp, i.e. 30 December Sunday. The facility was arranged in cooperation by expert doctors from Karnataka Cancer Society, and the local population availed its benefits. Local residents were also invited to a special program on the 5th day evening, where Suramani.Dr.DattatreyaMelankar delivered a workshop on ‘Harikatha Sankeerthana.’ Various teaching and learning, and discussion programs were held everyday during the camp for participants. There was also be a cultural event depicting the magnificence of Tulunadu. Over 300 NSS candidates, NSS officers and authorities from 19 universities and 6 states took part in the national camp, making it a grand success.